Fossil History of Durham:
Also known as the Durham mines, our Durham Trails are also one of the best places in Georgia to collect plant fossils from the Pennsylvanian period, which dates back to approximately 320 to 300 million years ago. Although most of the land is now state or privately owned, one section owned by the Lula Lake Land Trust is open to fossil collecting with advance permission.

The area was once a coastal swamp forest populated by the giant ancestors of ferns, seed ferns, club mosses and horsetails. As these plants died, they accumulated in the stagnant waters of the swamp bottom but did not fully decay because the water was too acidic and low in oxygen to support bacteria. Periodic flooding covered this organic material, called peat, with sediments. The waters would then recede, and the forest would flourish once again. This process happened over and over for millions of years, only ceasing when the land was uplifted into the Appalachian Mountains of today. Gradual compaction and heat eventually transformed the peat into layers of coal while the sediments hardened into layers of shale and sandstone. This process formed the vast Appalachian coal beds that stretch from Alabama into Pennsylvania, including the Durham mines area.

Records of mining at Durham date back to 1891, but mining for coal may have begun before the Civil War. The town, originally called Pittsburgh, changed its name to Durham when the Durham Iron and Coal Company took over operations. Mining was conducted mostly underground with convict labor leased from the state, the majority of whom were African Americans. A rail line was built from Durham down the mountain to Chickamauga, where ovens refined the coal into coke. This coal product, which burned longer and at a higher temperature than unprocessed coal, was shipped north to the iron furnaces in Chattanooga. Large-scale mining ended at Durham in the 1940s, although mining briefly returned to the area in the 1970s. The roadway going into the property is part of the old rail line, and you can still find rusty rail spikes when looking for fossils.

During mining, the shale and sandstone were separated from the coal and piled into dumps. Today, these dumps remain as ridges throughout the Lula Lake Land Trust property. These are the best places to collect. You will not find much in the sandstone, but the shale can reveal delicately preserved fossils when you split it. Leaf clusters of seed ferns such as Mariopteris, Neuropteris, and Sphenopteris in particular are especially abundant and make attractive specimens. If you are lucky, you may encounter impressions of the Lepidodendron, a giant lycopod whose tree trunk resembles tire tracks.

There is plenty of material in the dumps of the Durham mines at the Lula Lake Land Trust. Fossils are relatively easy to collect, and the site can provide years of educational fossil collecting for everyone. 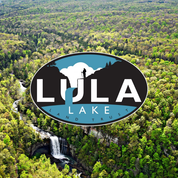 Don't just visit... make a difference!
Did you know that Lula Lake is preserved through donations from generous supporters? These Heroes on Conservation are responsible for preserving the natural beauty that will take your breath away during your visit.  Through support of donations, we have helped protect 12,000 acres for going on 26 years. Find out how you can make a difference by visiting our webpage here or emailing our Director of Development, Matthew, at matthew@lulalake.org.